The first aim on our Swiss – Colombian project was to find out whether in vitro-produced mycorrhizal fungi could significantly increase the yield of cassava roots (the part that is used for food).

In our first study, we have shown that in two different regions, that have a different soil and climate and with two completely different varieties of cassava we were able to increase the yield of cassava roots by about 20% with the addition of in vitro-produced mycorrhizal fungi (see graphs on the right). At one field site we were simultaneously able to reduce phosphate fertilizer to half of what the farmer normally applies while maintaining high yields. The work is published in PLoS One (an open access journal). Click here to see the different ways that we are transferring this technology to farmers in Colombia.

The main points of the publication are: 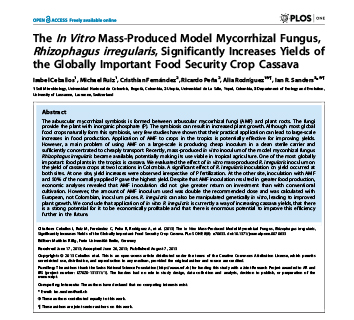