The main focus of my research is cultural politics in America, and in the past few years, I have worked on literature, film, and popular culture of the nineteenth and twentieth centuries. One point of entry into the complex dynamic between literature and culture for me has been genre theory, specifically the gothic and melodrama, and more recently, adventure. All are genres that perform important cultural work and offer a privileged field for investigating the interaction between history, ideology, affect and cultural production. Gender and feminism have also informed most of my research projects.

In 2010, I published The Poetics and Politics of the American Gothic: Gender and Slavery in Nineteenth-Century American Literature (Ashgate). This book challenges the common wisdom that gothic literature is mainly about fear. Instead, I argue, the gothic is also about ethical and epistemological judgment. Historically, the literary gothic emerged from the anxieties about judgment that characterized the eighteenth century and which still inform the principal axes of modern culture and thought. I contend that this at least partly accounts for the endurance and ubiquity of the Gothic: it is a modern form uniquely adapted to rehearsing anxieties about judgment and justice that continue to define our modernity. Several editing projects and essays that I have published since 2010 have focused on the political and social questions that the Gothic is uniquely able to probe and explore in a literary or film language: Neoliberal Gothic , Gothic in an Age of Terror(ism), and Gothic Matters, a special volume of the journal Text Matters. I have also published several essays on Edgar Allan Poe in particular.

My most recent research project focuses on twentieth century representations of war and specifically the soldier in American literature and popular culture. Since America has been engaged in major and minor, global and covert wars since the start of the century, making warfare and military service a central aspect of American culture and politics, an effective analysis of this subject requires a multidisciplinary approach. I combine the hybrid methods of literary and media analysis standard in cultural studies with a more properly sociological framework in order to unpack the emotional, quasi-mystical, and ideological structures in a number of key texts. I also draw on gender theory, the cultural sociology of ritual and the sacred, and neo-Gramscian ideology critique to examine the charged and intensely ambivalent status of the soldier in American popular culture. The result, Combat Death in Contemporary American Culture: Popular Conceptions of War Since World War II since World War II, will be published later this year (2020, Lexington Press). During the last ten years, as I have worked on this topic, I have published essays on antiwar films, on war and memorialisation, on night vision sequences in Iraq War films, on war gothic, on war and national renewal, and military masculinity. 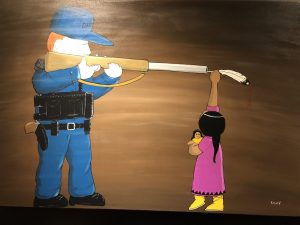 One of the spin-off research topics generated by the book project is that of adventure. This is a genre that has become increasingly central to contemporary America, and is tightly linked to the culture of militarism, war as entertainment, and a beleaguered white masculinity. Long considered mainly a British form of young adult fiction, adventure is a cultural narrative mode that permeates American literature, cinema and media, especially representations of violence as spectacle or rite of passage. A special issue of the Journal of Popular Culture is was published in 2018, with Johan Hoglund (Linnaeus University) as co-editor. My essay on American Sniper as an example of contemporary pro-war adventure won the annual prize for best essay in 2019.

Another article, on combat film and melodrama, represents an important merging of two strands of interest: body genres and war culture. By “body genres” I refer to Linda Williams’ description of three film genres that work by producing physical responses: melodrama, horror and pornography. Melodrama has been a source of fascination in recent years because of the heightened way in which it blends affect, ethics, and popular art. In an essay on militarism and combat death, published in Passionate Politics: The Cultural Work of American Melodrama (eds. Ralph Poole and Ilka Saal), I challenge the common misconception that melodrama is essentially a women’s genre by showing how American war films are typically constructed as melodramas, featuring the soldier as victim-hero. The effects of this formula are ideologically diverse, but the basic function of melodrama is to redeem death from meaninglessness, it therefore necessarily works to re-enchant war death. Another interesting thing that emerged for me in this project is the fact that, since melodrama usually serves to rehabilitate and socially legitimate a marginal figure in society (e.g. the fallen woman, the slave, the immigrant meatpacker), the figure who seems to require rehabilitation and legitimation is the soldier himself, a fact that casts the ambivalent status of soldiers in modern secular societies into relief.

This brings me to a cluster of topics which have been central to my research: gender, feminism and sexuality. An essay on reading Henry James’ Turn of the Screw through a queer theory paradigm grew out of a book chapter in The Poetics and Politics of the American Gothic. As this chapter confronts James’ queer wordplay with Gilman’s feminist activism, I have found myself thinking increasingly about the intersections and tensions between these two methodologies. An essay on Louisa May Alcott — my top read on Academia.edu — is the result of some of these reflections, in which I explored the relative merits of feminism and queer theory for understanding the complex gender issues in Alcott’s work. Another essay on the transnational connections and cross-influences among queer Anglophone and Hispanophone poets also traces out an outline for a Hemispheric American tradition, or at least network, of queer writing.

A recurring topic in my research, and one that intersects explorations of war, the Gothic, gender and U.S. culture in all its forms, is that of race. No other social category has played as large a role in American history, literature, and popular culture, and my research has focused on identifying and understanding racism in order to combat it and move towards a more inclusive, diverse, and egalitarian society. From essays on Richard Wright, the Spielberg film Lincoln, and the South African movie District 9, to an essay on zombies and postcolonial rage, the issue of race occupies a central place in much of my work.

If my first book played down the emotional impact of gothic literature in favor of an approach exploring its ethical dimension, two of the articles that I have published since 2006 focus on the long overlooked affective aspect of aesthetic response. One of these grew directly out of the research of the book and concerns Poe’s ambivalent and mostly degraded status in the eyes of male modernists like T.S. Eliot and Henry James. In this essay, I discuss how the emotionally complex and unabashedly sensational dramaturgical structure favored by Poe fared rather poorly under the scrutiny of Anglo-American Modernism and its neo-Kantian aesthetics of disinterested contemplation. The result was a Poe who had been reduced to a juvenile and sexually suspect writer of stories for impressionable youth. I argue in this essay that it would be worthwhile to excavate some of the now forgotten terms and sensations of nineteenth-century aesthetics in order to rebuilt a richer critical vocabulary for aesthetic response than the varieties of detachment we have inherited from High Modernism.

My most recent (and future) research will be on the issue of climate change, environmentalism and what could be called the “rise of Gaia” in contemporary culture and activism. My interest in this cluster of issues is shared by many scholars and academics across the humanities and sciences these days and emerges from an acute sense of the urgency of the need to both act quickly and think differently about many aspects of contemporary life. In terms of research, I will probably explore the way environmental issues impact and intersect with militarism, since war and combat have been my preoccupation since nearly a decade. This perspective necessarily brings me into the field of indigenous activism, decolonisation theory and postcolonial studies since the environmental impact of war production and American war culture has been felt disproportionately by Native American and other indigenous people.

On a more philosophical level, I am interested by the way apocalyptic scenarios have captivated popular culture while ideas and imaginings of change to more sustainable forms of culture have not emerged in any convincing way, at least not since Ernest Callenbach’s brilliant novel in the 1970s, Ecotopia. Thus, on many levels I am intrigued by the importance of the utopian imagination and would like to spend more time on the urgent work of visualising, narrating, and thinking about what we can change and do in order to have better, more balanced, and spiritually and scientifically and ecologically grounded lives.

A related issue that I have taken up lately concerns the return of traditional, ancestral, shamanistic and alternative forms of healing, including plant medicines. These practices and explorations are “ecological” because they are affiliated with a larger shift in thinking about plant and animal intelligence, ecosystems, and the interconnected web of life and climate that we have come to call “Gaia” in recent decades. Essays on the wide margins of this research strand include an essay on intentional communities and another on the psychedelic aspects of Maxine Hong Kingston’s work.