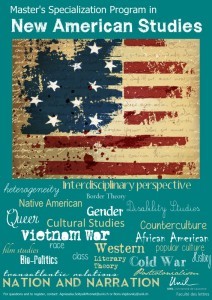 What is this program?

The New American Studies specialization program is a 30 credit program that Faculty of Letters MA students can add to their Master’s study plan to acquire a 120 credit MA with specialization. The intention to take the SPEC program should be announced to the Decanat (and to us — Borisand Agnieszka) at the end of the first year of your Master’s. Ideally you would take this program before writing your mémoire.
The program is open to students of the English Department or students with a BA in English, but students from other departments can apply and their demand will be considered. Also, students doing their MA in a sister university in Switzerland can come do the New American Studies specialization at UNIL.

This program situates itself on the frontier of contemporary American Studies as the field is being reconceived and reconfigured from within. More international and transnational, comparative, interdisciplinary, theoretically informed and politically engaged, the New American Studies eschews the exceptionalism of the Cold War paradigm of American Studies and proposes to look at North America and its multiple cultures from a de-centered and comparativist perspective.

How does it work?

The program consists of two parts, one leading to 12 credits and the other leading to 18. The first part is composed on an obligatory introductory course taught either by Boris Vejdovsky or Agnieszka Soltysik Monnet (taught only in the Autumn semester!), and another MA-level course in American literature and culture taught within the English department. A final 2 credits is acquired by participating in a MA colloquium and presenting an original research paper. The remaining 18 credits of the program can be earned by courses in American culture and literature offered within the department or by our collaborators in other departments at UNIL, as well as partners at nearby universities (e.g. Geneva, Fribourg, Bern, Basel, etc.)

What will you learn?

The program is designed to initiate you into the methodologies, key texts, and dominant concerns of contemporary American Studies, especially those known as the New American Studies, American Cultural Studies and International American Studies. The introductory class combines cultural theory, historical narrative, textual and rhetorical analysis, and approaches to visual culture. You will learn how narratives, tropes and myths are studied in relation to a national or transnational culture critique, and explore basic issues in African American culture, feminism and queer studies, decolonization, multiculturalism and identity politics, and cultural theory.

Contact Agnieszka or Boris and the decanat of the Faculté de Lettres at the end of your first year of master’s in order to sign up for the fall program.